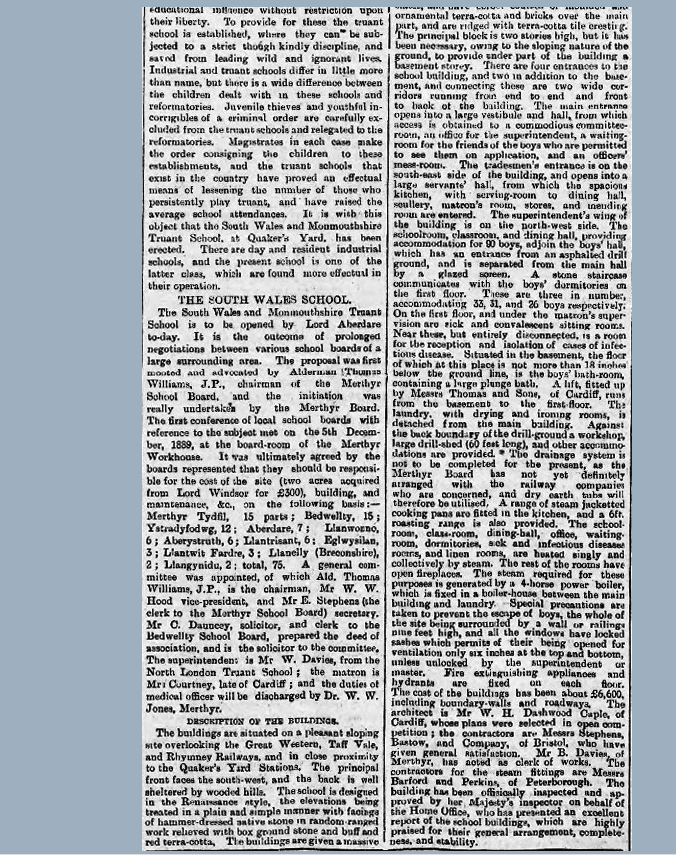 Plans were submitted in the early 1890’s to build a new Truant School at Quakers Yard (Edwardsville) or South Wales and Monmouthshire training school, to give it it’s proper name…This impressive building was erected in 1893, it had 75 beds. The building was used as a home for the elderly from 1957-1980 before being demolished. It is the site of a new hosing estate these days 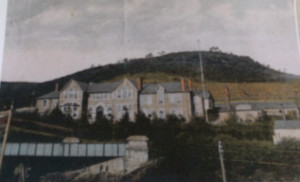 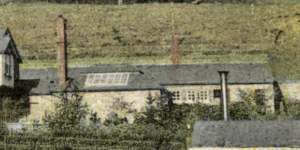 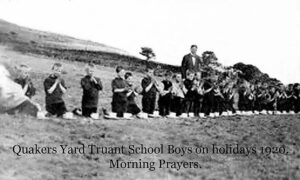 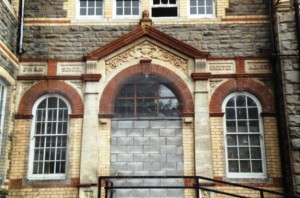 The children that stayed there had a strict diet and time table of events to follow during their stay at the home. The Merthyr Tydfil Library has allowed me to show this bit of history that shows part of the rule book for the home, this was from 1896…thanks to the Library for this piece of information.The three images below are courtesy of Merthyr Tydfil Library…a great source of local information. 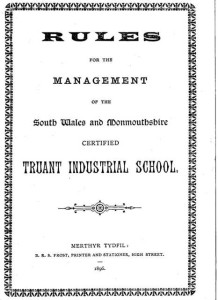 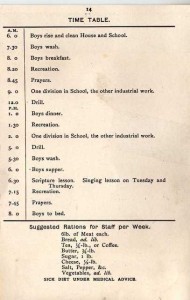 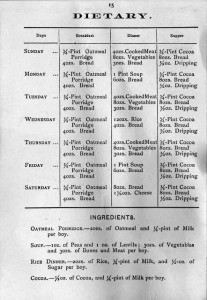 The baths provided much fun and pleasure for decades for both adults and children. The original baths was open air and was replaced by a new covered baths in the eighties. As this section will show its now lost for ever. 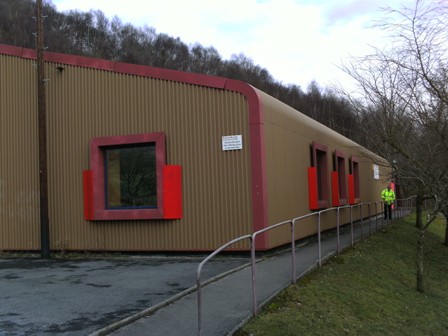 Security guard making sure nobody enters the site of Edwardsville baths, soon to be demolished 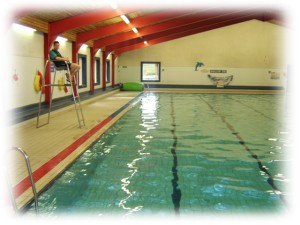 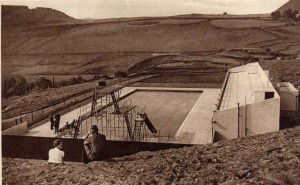 Very Early days at the Baths

The following is a report from 2007

The fight is on to save Edwardsville baths, and we need your help.

Protesters and the Express are teaming up to try to secure the future of the much-loved community facility, used by generations of families in Edwardsville, Treharris and beyond.

The pool has been earmarked for closure so it can make way for the new leisure complex being built at Rhydycar.

People opposed to the plans have already collected more than 2,000 signatures, which were presented to AMs at the Senedd in Cardiff Bay on Tuesday (December 11).

But those 2,000 signatures should only be the tip of the iceberg. More needs to be done.

Since the plans were announced last year, the Express has been inundated by letters and calls from concerned residents who don’t want to see the baths close.

Angus Gwynne, aged 69, of Treharris, started using the pool in the 1940s and his grandchildren have also enjoyed the baths. 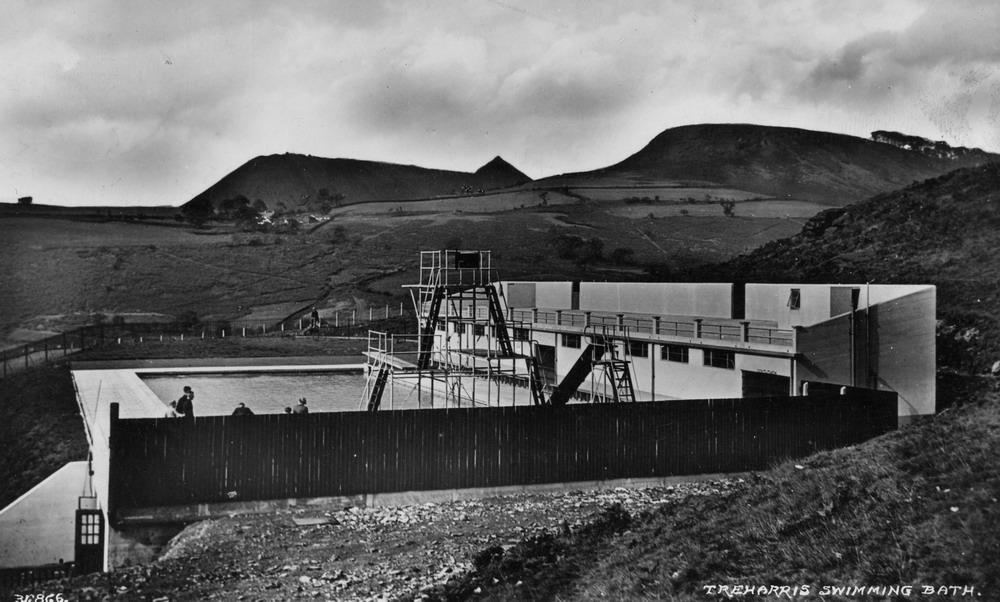 “We are being robbed,” he said. “We will be losing the money brought in by people who use the pool.”

Ann Tweedy, 60, also from Treharris, feels the council had their chance 30 years ago to put a swimming pool in Rhydycar.

“We were in the meeting when they decided to have a bowls centre instead,” she said.

“This is one of the unhealthiest places in Great Britain and now they are taking the pool away.”

Kay Powell, 66, from Trelewis, first used the pool when she was at school.

“My grandchildren also used the facility which they are taking away.

“It was a busy place but now the children will be expected to go to Merthyr or Aberfan.”

Comments ranged from how the south of the borough is the “forgotten” part of Merthyr Tydfil to how there would be serious health implications were the pool to shut.

Following on from the overwhelming opposition to the closure, the Express decided it was time to support local residents and throw its weight behind their campaign.

We want you to show your support and ensure this community building remains open and continues to bring pleasure to its many users, young and old, for decades to come.

All you need to do is fill in the coupon on this page and return it to us at the Express. We can then pass it on to the appropriate people who will add your signature to the many others they are collecting.

One of the coordinators of the campaign, Monica Mehers, of Heol-y-Glyn, Treharris, said: “A lot of children can walk to the pool.

“When it opens, the pool in Rhydycar is a long way away. You can’t put nine or 10-year-olds on the bus on their own, all the way into the town centre.

“When you look at the Minister for Sport’s vision for the future, the emphasis is on sport and exercise, particularly in deprived areas.

“The council would be taking away one of our main forms of exercise. This pool is for our children.

“We’ve been told that the council would subsidise buses to take us up to the new pool but they would be limited, taking our choice away of when we go swimming.

“One of the reasons given for the closure was that Edwardsville no longer meets disability regulations. But when work was being done on the pool a couple of years ago, the disability aid was removed and taken to Aberfan pool. So there is a disability aid available, it has just never been returned from Aberfan.

“People have had no choice in the matter. The council is just riding roughshod over us all.”

“This is a very important subject for local people and I am pleased that the Assembly’s Petitions Committee will now discuss the issue further,” said Mr Lewis.

“I was disappointed not to have been able to meet the petitioners in person, but have spoken to Ms Mehers this afternoon and know that they eagerly await the Committee’s report.” 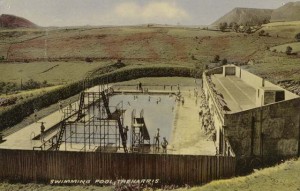 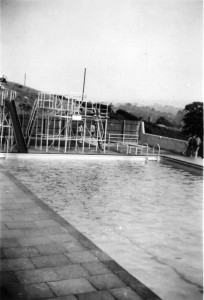 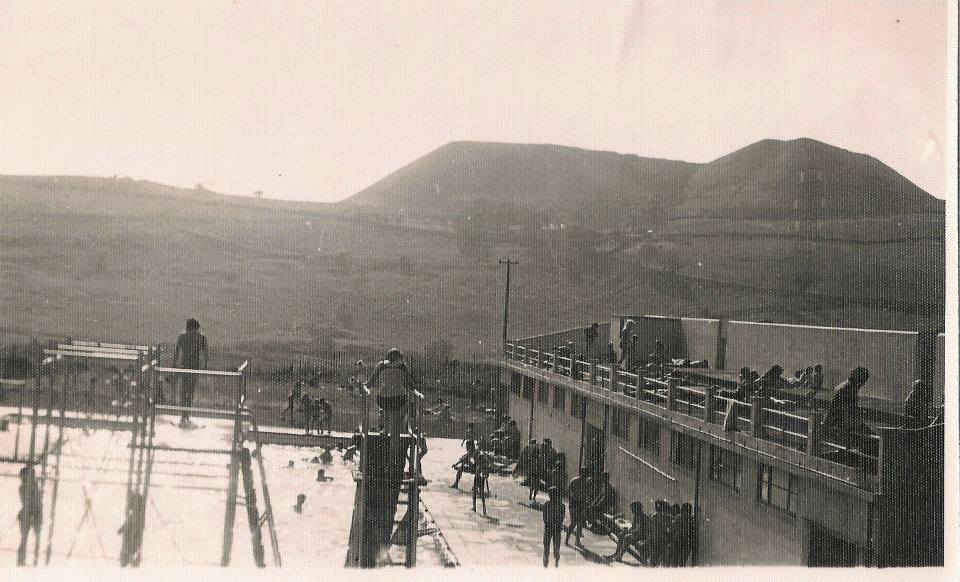 Enjoying the baths, note the coal tips which are now removed

The battle was lost and during late September 2010, the Edwardsville swimming Pool was demolished ending an era spanning almost 90 years.
The sad photographs below were kindly given to our website by Adrian Evans a long time resident of Edwardsville.
The baths will have memories for almost all the residents of our District and I personally remember going to the open Baths back in 1970 when you had to take it in turns to use the pool because it was so full…they would give you a disc for an allocated amount of time in the pool.
We used to go across a sheep’s path then and climb the hills through the woods into the nearby Treharris Park.

Walking back to Trelewis we would often get a loaf of bread each…a small cob…take out the bread and stuff the crust full of chips ready for our walk back across the Gantry at the colliery and back to our village.
Happy days and now the children of our district are deprived of a sporting facility that promoted healthy living all because of funding issues…a disgrace to be honest.

The last set of pictures show the sad demolition 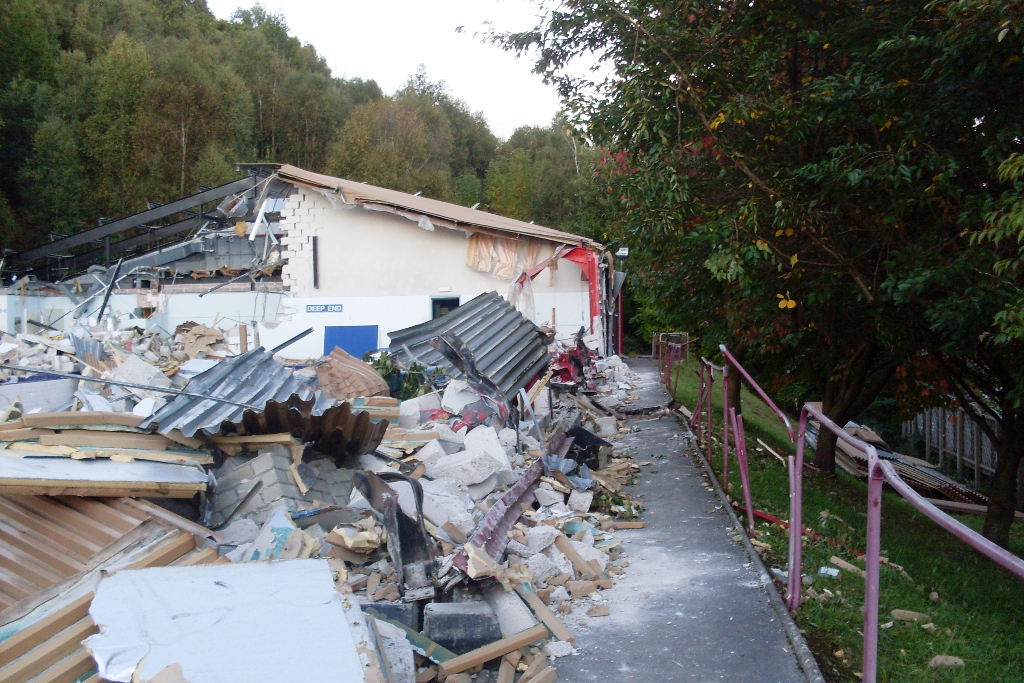 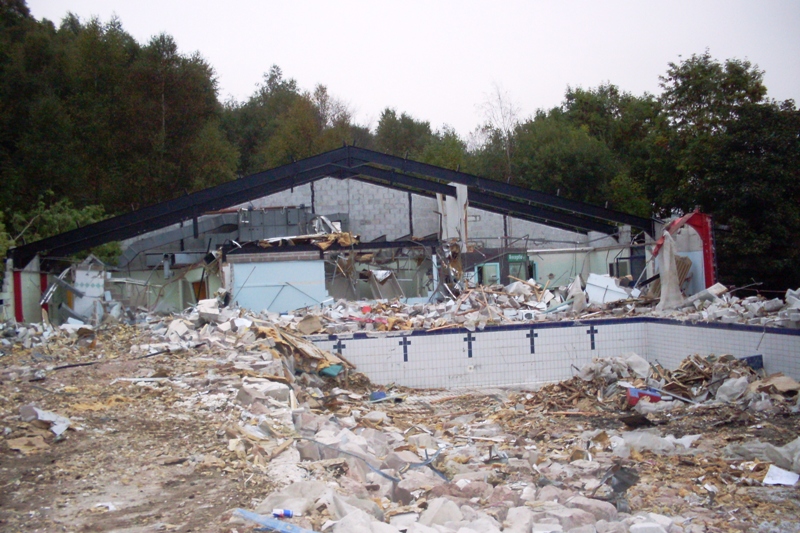 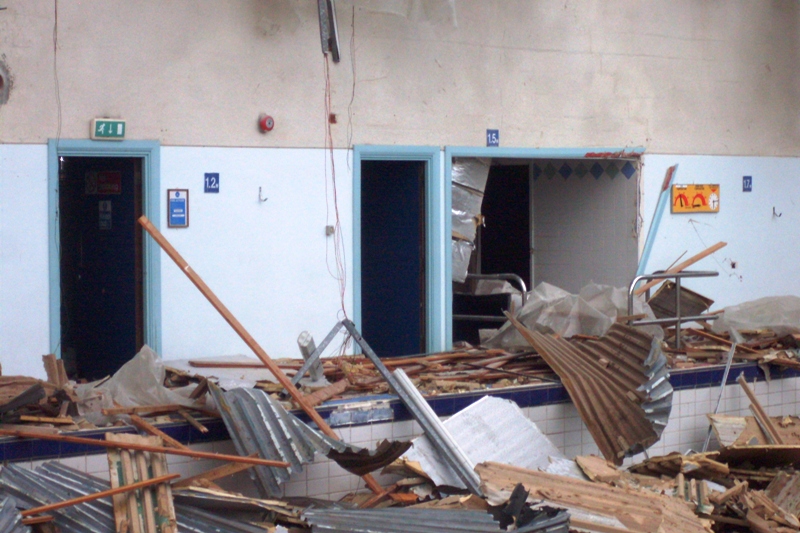 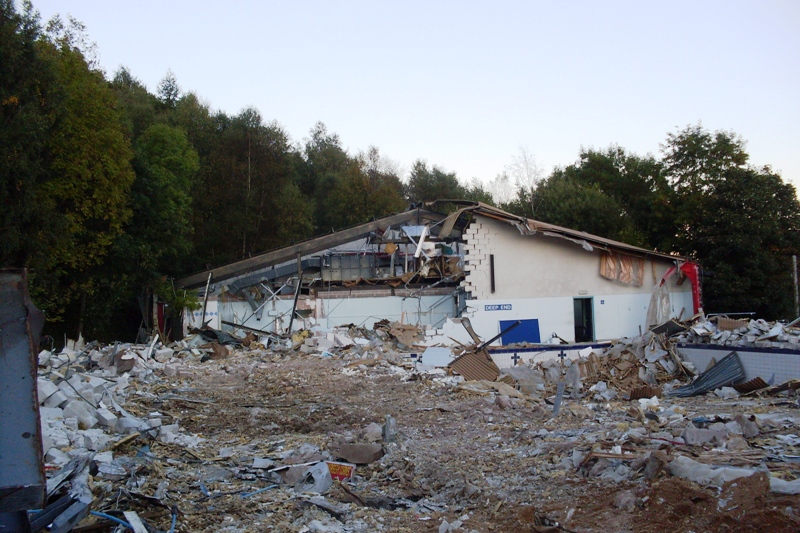 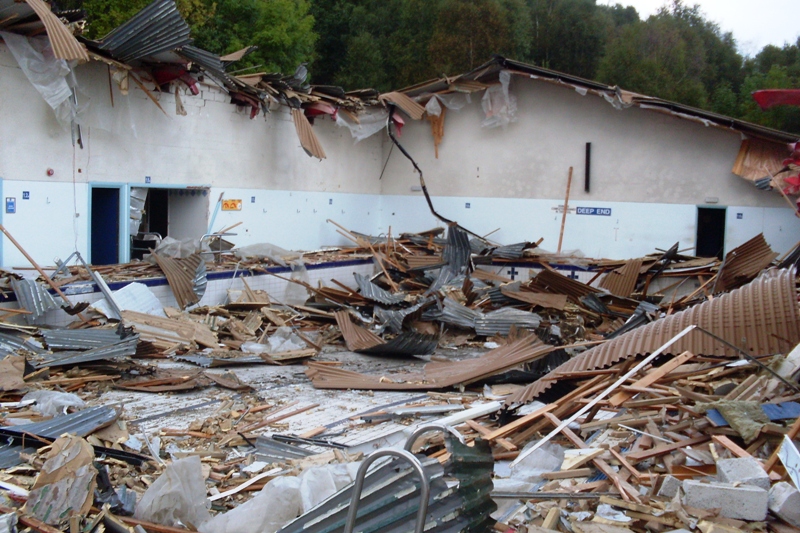 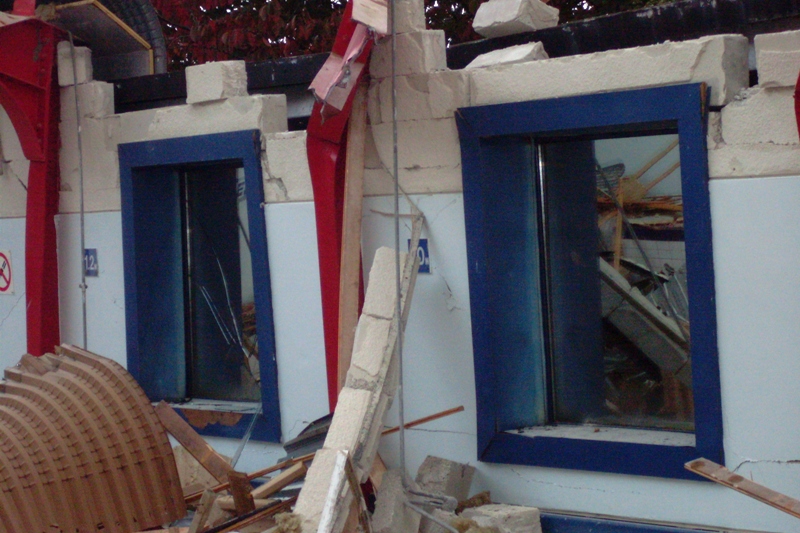 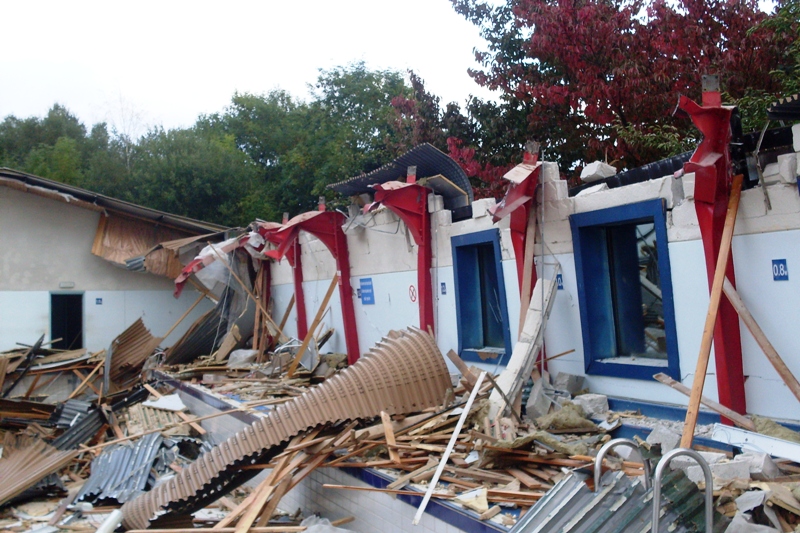 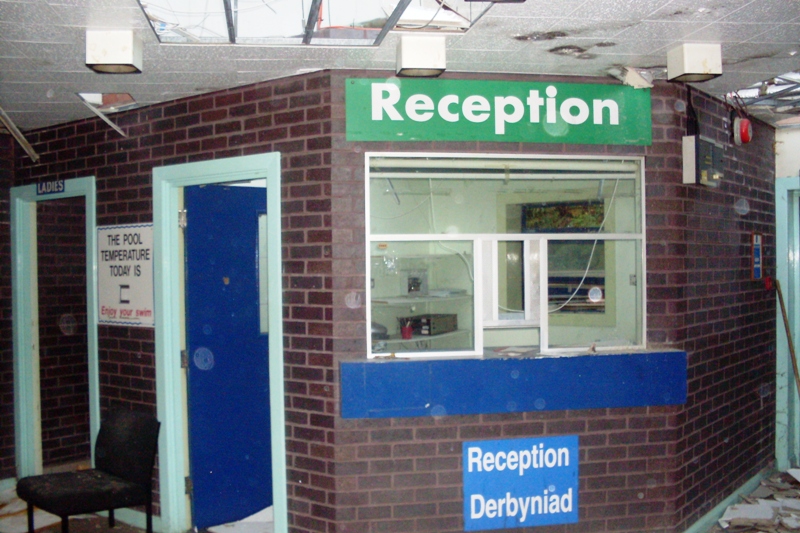 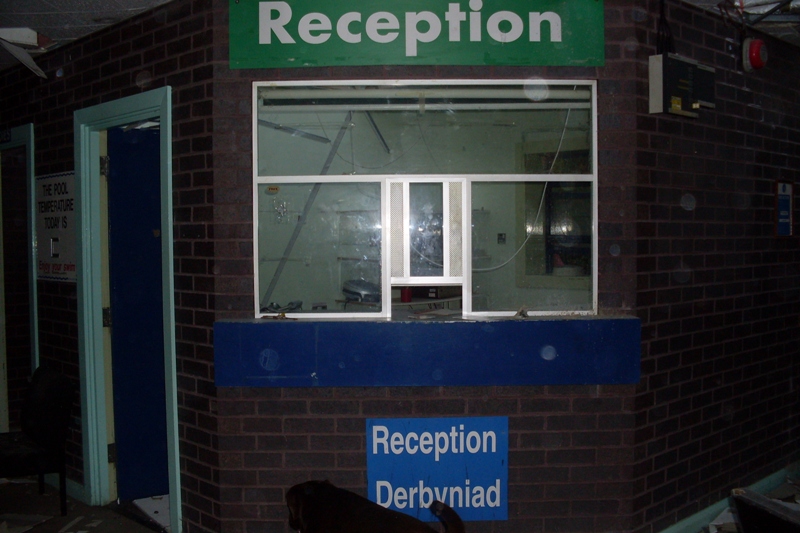 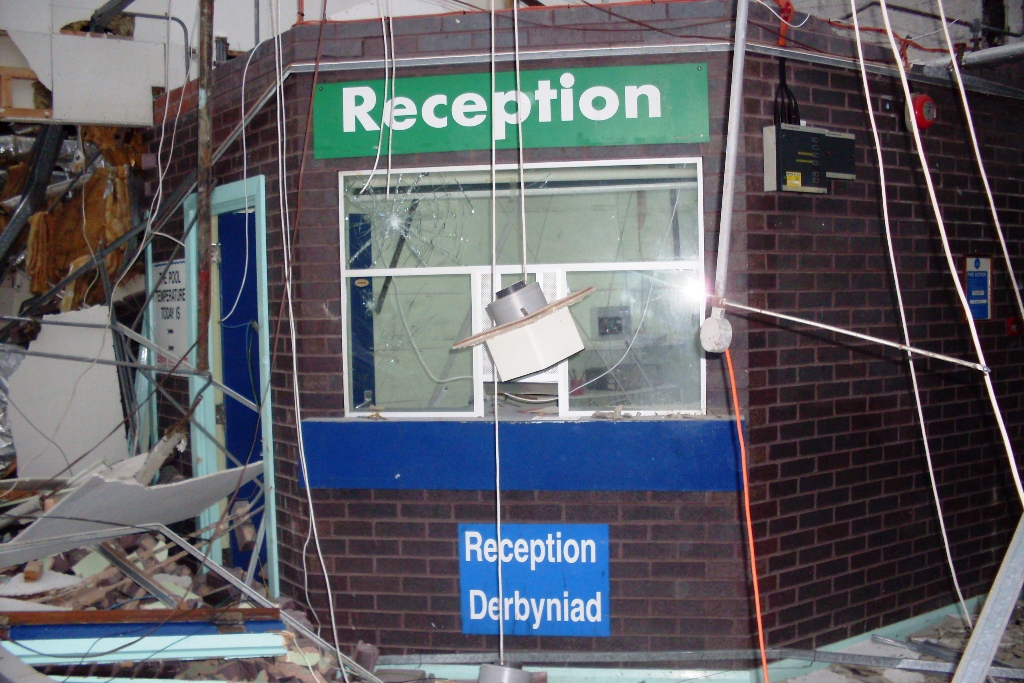 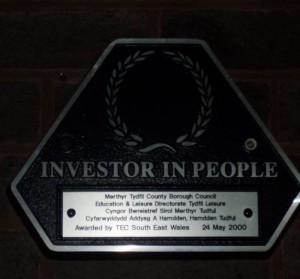 That sign is a bit of a joke really 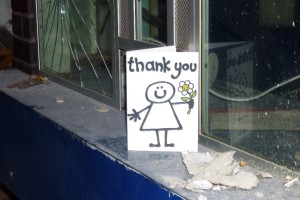 A final farewell thank you.