This page is about important events and the years in which they happened, some will be very important dates, others will not be, but they are important or significant in their own way in the history of the Treharris area. This page will be a work in progress and we are always looking for more interesting events/dates to add to the page. If you have any dates/events that need adding, please contact us through the contact page

1583
The Pontygwaith (bridge of the works) was constructed near a small iron works, it still stands today

1665
Quakers opened a burial ground on the Pantanas estate, now the centre of Quakers Yard. William Howe of Bristol had the honour

1790’s
At a small community in Penlocks , canal engineers built a staircase of 16 canal locks down to the canal basin at Abercynon

1860/1870
Exact date not known, Nelson Handball court was built on land owned by the Wingfield and Macintosh estate

1883
NantWen colliery and Number 8 Colli level were open in the far end of the bottom of Bedlinog. Tabernacle chapel was built, Treharris

The Graig Bedlinog School was opened

1889
Ebenezer chapel in Trelewis was opened

1892
Jimmy Wilde the Flyweight boxing champion of the world was born at Pentwyn Deintyr, near Fiddlers Elbow, Quakers Yard

1893
Ocean coal company take over the Harris mine, it was to be re named Deep navigation colliery

1893
The Truant school was opened in Edwardsville

1893
The workmen’s hall was built, it later become a cinema “The Palace”

1910
Is a red-letter day in the history of the Masonic Lodge, for it was on that day that the Foundation Stone of the new building was laid on the Williams terrace site Treharris

1925
May 31, a proud day for Trelewis as a union Jack was unfurled to reveal the war memorial on Captains hill. 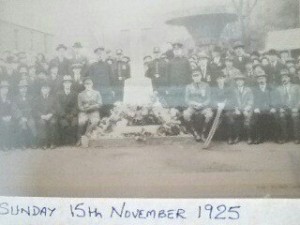 1926
The General Strike and the Treharris Soup Kitchen is founded, Treharris had its own town crier, William Williams, of Evan Street

1926
Setting-up of Spencer’s Union, the South Wales Industrial Union is set up at Taff-Merthyr Colliery. Many miners opposed this union in favour of the south Wales miners Federation.

Nelson Memorial erected next to the Nelson Inn

1928
Boxing, December Danny Andrews of Treharris beat Tommy Farr in a sixth round knock out

1930
The majority of houses were built in Cilhaul, Treharris

Treharris Library clock is erected in memory of the men and women of this ward who served and fell for the cause of humanity in the Great War 1914-1918. Associated with the clock are two war memorial plaques.One for each of the World wars.

1942
Bevin boys were employed at the local pits

1948
May Day Celebrations at the Athletic Ground Treharris

1984-85
Miners strike, “women in support of miners” groups set up in communities around Treharris

1988
The Treharris Heritage Stone by Afan Taf School was put in place. a lot of information on this site is from the work that was done by the staff and children of Afon Taf High School

1991
Deep Navigation closes on Good Friday, End of an Era celebrations in Treharris

2002
June, the re-dedication of the Trelewis war Memorial in its new home at the centre of the village.

2008
Edwardsville baths is closed, although protestors hoped for a change of heart from Merthyr Council

2009
Work begins on the new Health centre, located above Railway Terrace, just below the Boys and Girls club.

Dog and Rabbit club shut down

Extension and refurbishment of Nelson RFC

Colliers Cwtch opens to replace the old Dog and Rabbit

Work begins on a new housing estate in Trelewis

Colliers Cwtch formerly the dog and rabbit is renovated

Work completed on the Treharris Square

Work begins on refurbishment of the Navigation hotel Treharris

Corona Virus lockdown in the district from March 23rd