Lockdown into sixth week and social distancing and restrictions still in force. The  government are saying that the single most important action we can all take, in fighting coronavirus, is to stay at
home in order to protect the NHS and save lives.
When we reduce our day-to-day contact with other people, we will reduce the spread
of the infection. That is why the government has introduced three new measures.
1. Requiring people to stay at home, except for very limited purposes
2. Closing certain businesses and venues
3. Stopping gatherings of more than two people in public
Following these measures will help limit the spread of coronavirus, reduce the impact on the NHS and save lives. Key parts of the
measures are underpinned by law,which sets out clearly what you must and must not do – every person in the country
must comply with this. The relevant authorities, including the police, have been given the powers to enforce the law– including through fines and dispersing gatherings.The government will keep these measures under close review, and relax them if the
evidence shows this is possible. Below we see Webbers fish bar in Nelson only pick up of phone orders allowed. 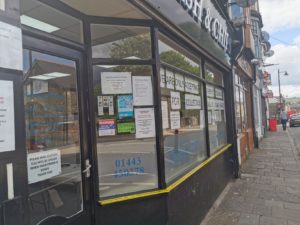 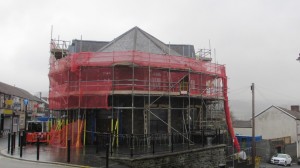 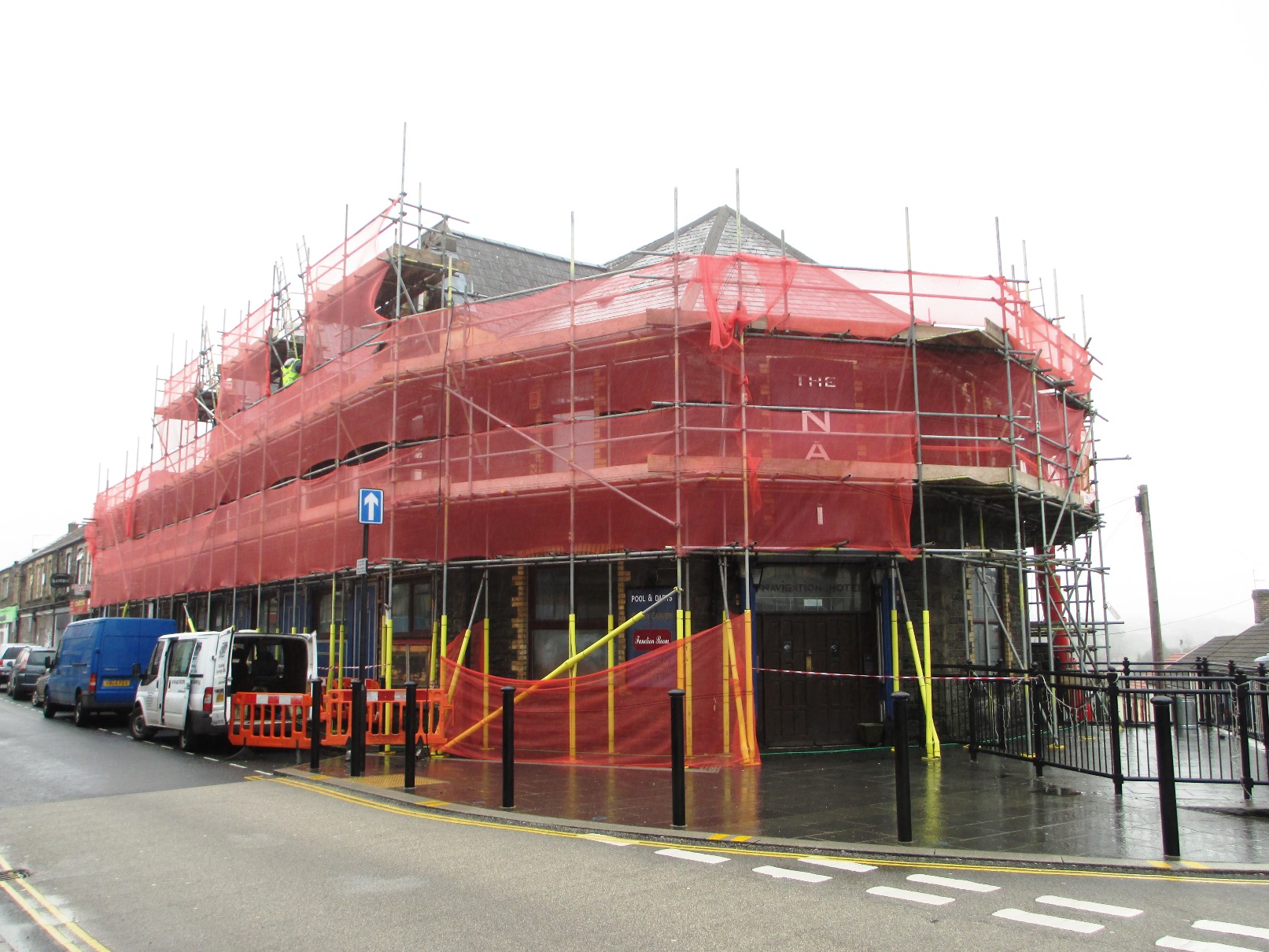 The site of the old Palace cinema redeveloped

February 2014,Welcome to the new website, it will take a couple of weeks to transfer the data from the old site but its hoped this one will provide easier navigation and enjoyment to all users. 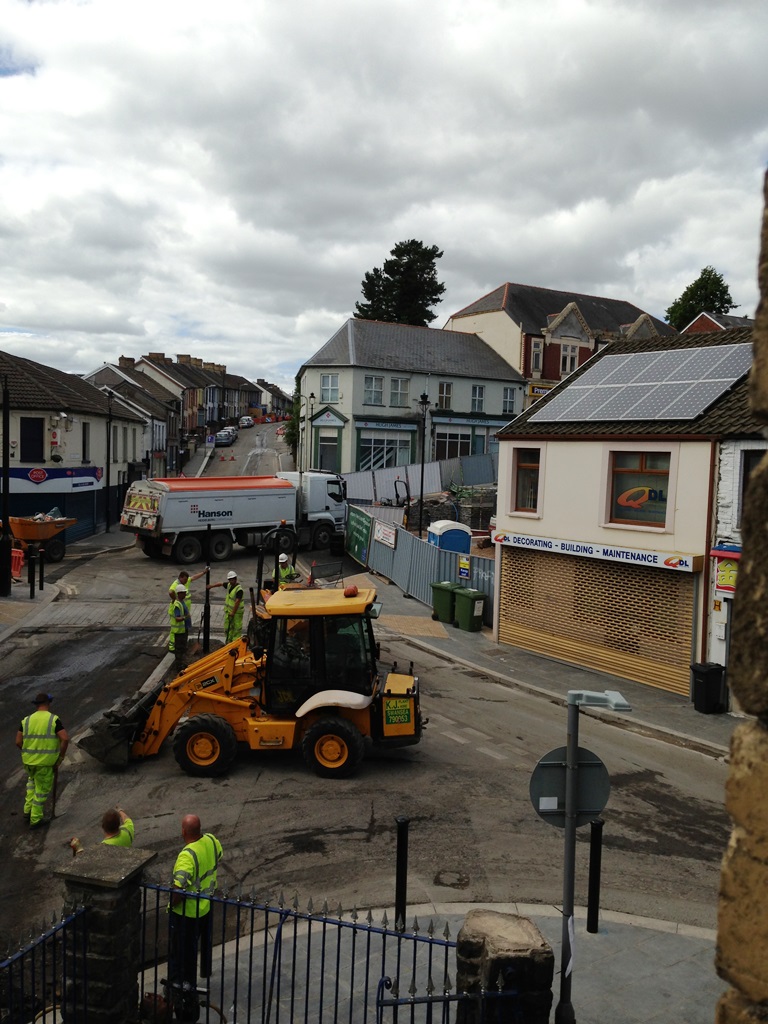 Many months of work are continuing late into the summer and the tarmac gang have now arrived, forcing the closure of both Cardiff road and Fox Street on Sunday August 11th,2013. 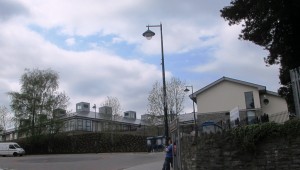 The new home for the elderly being built on the old Bargoed house site is now almost ready to open (August 10th,2013) This view from Bargoed terrace was taken after new shrubbery was planted in the grounds in front of the very large new buildings. 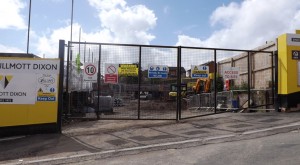 View of the new homes from Williams Terrace

Here is the view looking from behind, taken from Oaklands Terrace. 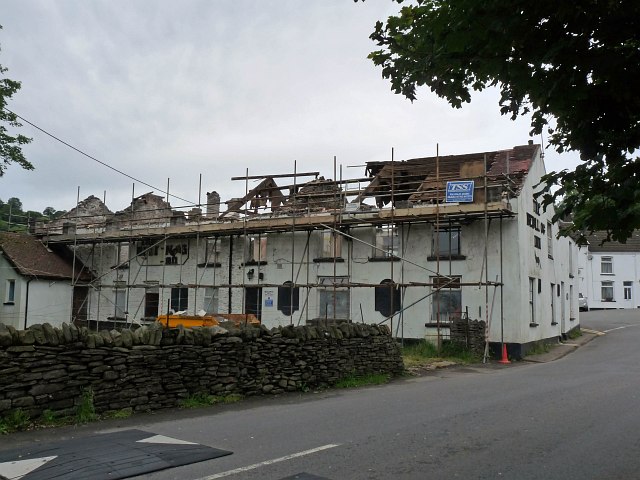 Once again the Bedlinog Inn is closed after many troubled times during the last decade. It is one of the oldest buildings in the village and hopefully the extensive renovations will give it a new lease of life. 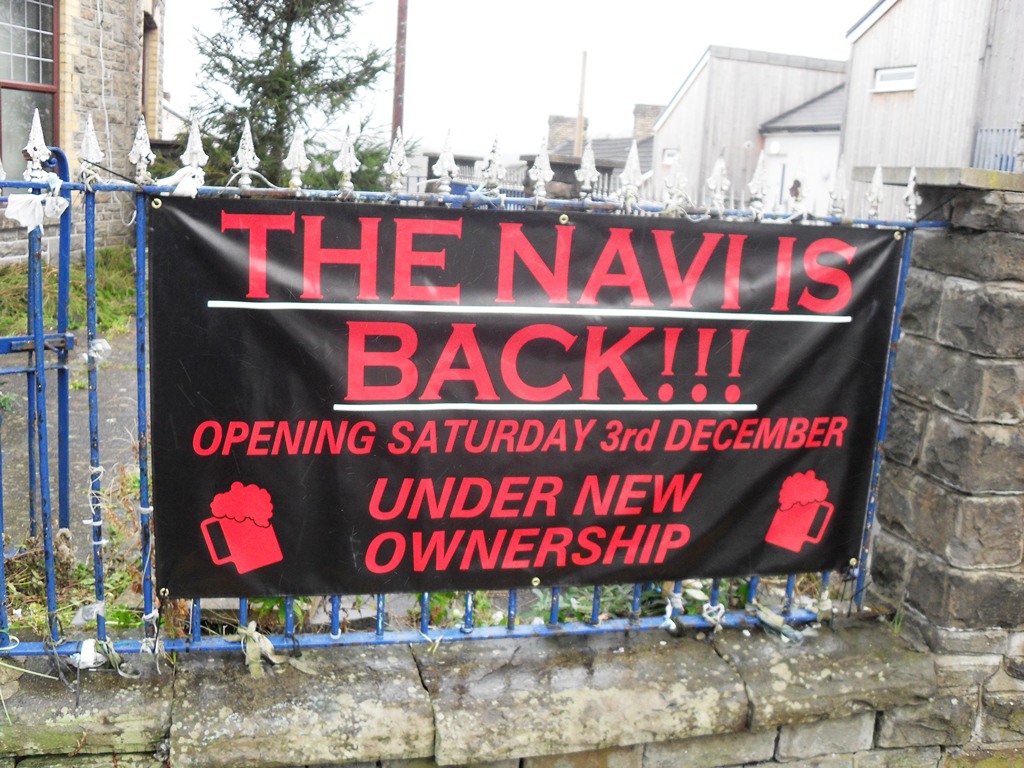 The Navigation hotel, built in 1874, as seen many owners and managers over the years and many a good time was had at the old place. Over the last few years the brewery has leased the pub out to various tenants who all tried to make the pub a success but it sadly fell into a tired old building that was losing trade.
A few months back Geraint Corkrey and his partner Charlene decided to  buy the pub and their offer was accepted and they became the new owners.
A fantastic effort by friends, volunteers and Kevin R their craftsman as seen a transformation and they intend opening the public house on Saturday December 3rd,2011…people will hopefully be delighted with the new lease of life that the Navi has been given and the knowledge that the new owners intend to stay for many years, always trying to improve the pub for the locals.

It is again with great sadness that I have to report the sad loss of one of my major contributors to this website, Roger Vowles. Roger was without doubt one of the true characters of Treharris and he will be sadly missed by everyone who knew him. I have a little item about Roger under the Treharris people part of this site, but believe me his contributions were enormous.

Roger was a former miner and actually saved the old pit hooter for the community, he was a formidable, honest man who was frank in his views and joined a few committees to help the community following his retirement.

God Bless Roger, it was a pleasure to have known you. 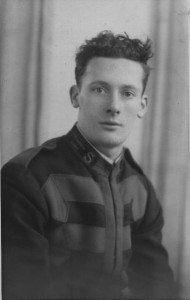 William Morris, one of my very important contributors to this website has sadly passed away from a sudden illness last week. Bill kindly agreed to an interview with me a couple of years ago and it is on the site under the Treharris section (people) I am so glad we did that now because Bill gives us an interesting account of what it was like to live in our District back in the period between the two great wars.

I will miss Bills’ correspondence but not as much as he will be missed by his family and everyone who knew him…a proper gentleman
R.I.P. Bill

Out with the Old in with the new

During late April 2011 they demolished our local doctors’ surgery next to St Mathias church, it had been there over 50 years, we now have a brand new surgery on the old entrance to Deep Navigation colliery.Here are two more photographs taken May 2011 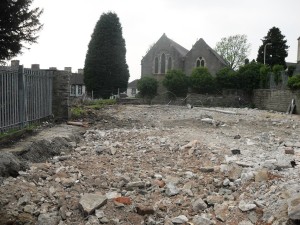 Amongst all the recent demolition of old buildings in our district it was nice to see construction taking place at the hand ball court in Nelson. The work tidies the landmark up and makes it safer to play there…plus it looks a lot better. 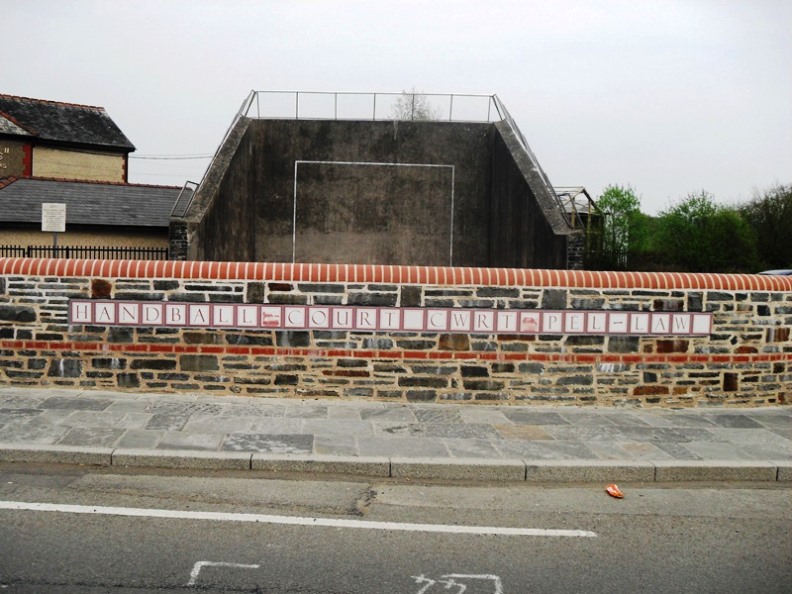 2010
New Health centre…Out with the old…in with the new
A new health centre will be opened in Treharris on Tuesday April 20th 2010. It has been built during the last 12 months on the entrance to the former Deep Navigation colliery, opposite Treharris Boys and Girls
club. (There are photographs of the construction phases on the bottom of the Treharris photo section of this site) 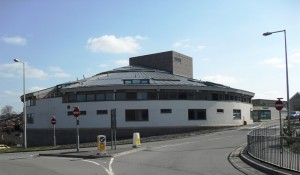 The old health centre built in the 1960’s is now empty and it is up for sale. It was built on the site of the Bargoed house grounds next to St Mathias church and has served the community well for nearly 50 years. 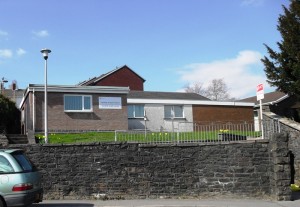 The Treharris workmen’s club has closed…commonly known as the “Dog and Rabbit” this once popular club has suffered financial losses for a while now and finally had to close this week. Hopefully someone will come along and take over the debt but at the moment that is unlikely. 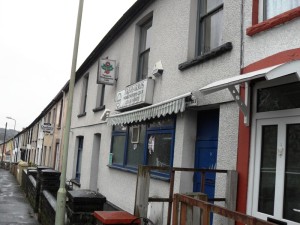 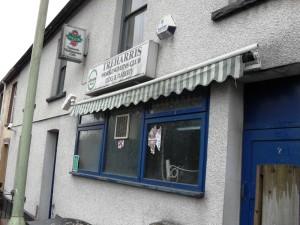 It is 5 months now since the Treharris rugby club was reformed. They have done really well to date and it has been a great success. They need and deserve the support of the Town and we wish them every success for the future. 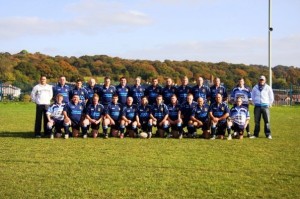 The new Health centre for the Treharris district is progressing nicely and it should be finished in the spring. It is a very large building and numerous health services are going to be based there. It is sited on the old entrance to Deep Navigation colliery. I have put some recent pictures below to update the work. 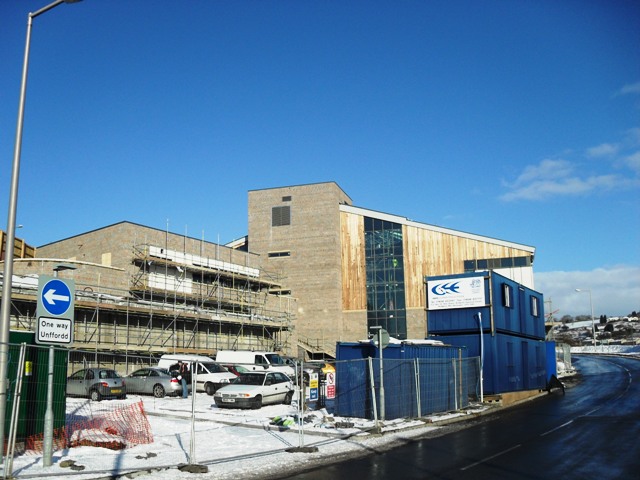 January 2010, the road you see is the by pass that was created behind fox Street. 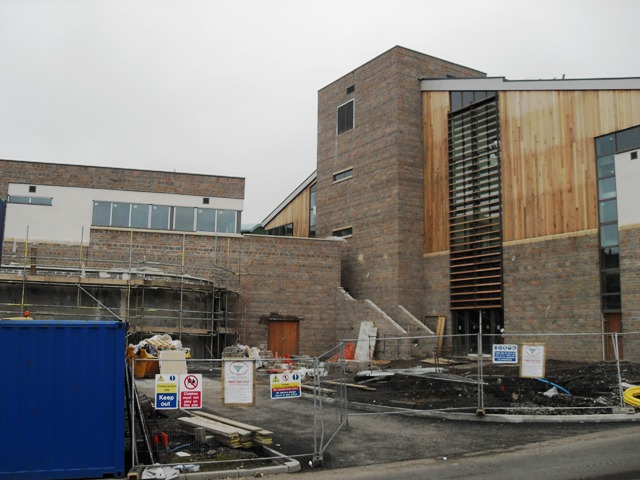 Ex-councillor Leonard Lewis, from Nelson, is to be made an MBE in the New Year Honours List.

Mr Lewis, 83, will be given the honour for more than 30 years service through Caerphilly County Borough Council and Nelson Community Council.

A community leader, he is also chair of governors at Llancaiach Junior school and Lewis Girls school.

Well done Len, a well deserved honour for someone who dedicated his political life to the people of Nelson. October 20th 1909 was a red letter day in the history of Treharris with the opening of the Public Free Library in Perrott Street, a huge success for the people of Treharris.

The Mayor, Alderman Andrew Wilson, who lived within a short distance from the building, opened the Library with a gold key. The design was by William Dowdeswell, architect, Treharris. The general contractors were Jones Bros. of Treharris, who did their work well for a total cost of £2,470. It is rectangular building measuring 65 feet by 35 feet in the English, Renaissance style using bath-stone.  When it was built it had enough space to accommodate 3,600 volumes and in 1909 there was a special ladies’ reading room but no children’s library. The Library has moved with the times; in its centenary year it has a modern self-service system. In the words of Andrew Wilson in 1909, ‘It will be of great educational advantage to the present and future generations in this district’.

Displays of photographs and objects which reflect life in 1909 will be on view in Treharris Library all week.

The ‘Special Day’, come along and see the staff of Treharris Library dressed in the costume of 1909 and have a nostalgic chat

12.30  Mayor ……  presentation of a framed picture of Treharris Library  ( artist Pauline George )  to the Mayor accepting the picture on behalf on Merthyr Libraries.

There will be cards for sale with pictures of the Treharris  Library, also postcards of 1909  and  2009  and  a reproduction 19th century print of Treharris for sale.

Special Centenary cake to be cut by the Mayor.

The Treharris Salvation Band will play outside the Library

2pm   Margaret Lloyd will teach a class in the style of 1909 …..With a strong emphasis on punishments, problems like fleas and ring worm etc. and all the nasty things that children love. All welcome to attend.

Launch of the 2010 ‘new style’ Calendar of Merthyr Tydfil which has pictures of Treharris  and  also the launch of the20th Merthyr Historian  Book ( reduced price at the launch ) All welcome.

The Future …….. visits from the local nursery.

2pm ….  2nd  class from Edwardsville for a  session with Ruth from Cyfarthfa Museum on toys in 1909.

Trelewis, Treharris and parts of Nelson were affected when a major water main burst near the FFald Bridge. Thousands of people lost their water supply and bottled water was handed out freely by the water board to all residents. The main road between Trelewis and Treharris was closed and diversions were in place. The problem is now repaired and the clean up is under way 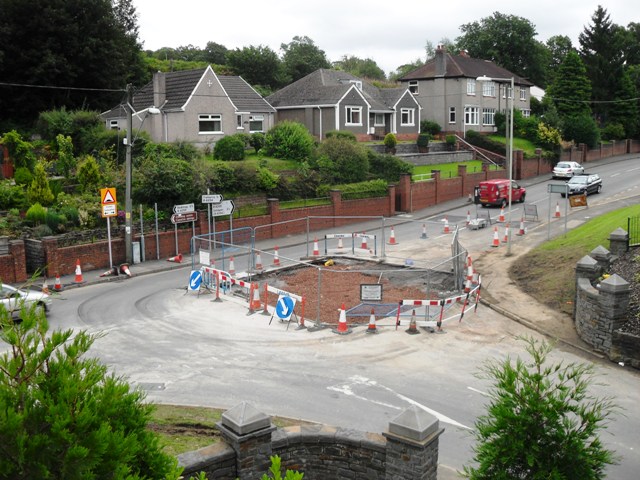 A new building has been erected in the grounds of the old school in Trelewis. A large team of workers have amazingly built a large building in less than 2 weeks.The building will be used by the congregation that worship in the village. 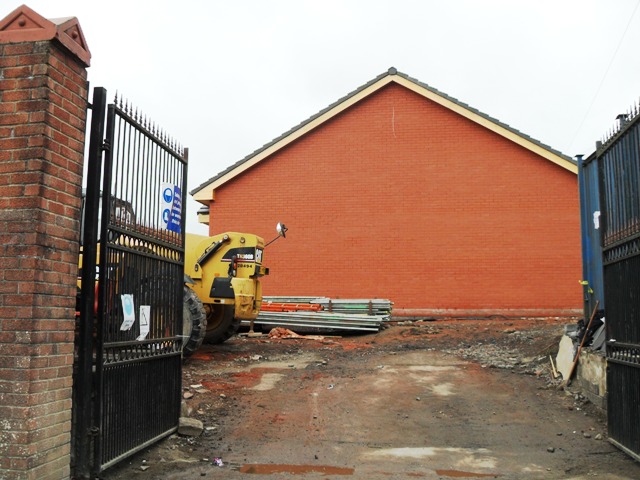