Very rarely speechless, but I recieved a few e mails from a former Nelson resident who wrote the following –

My name is Brian Beck, I was born on Shingrig Road, Nelson in January 1938. I lived there overlooking the railway station until I was 12yrs old when we as a family moved to Caerphilly in 1950. After a long career in the Royal Navy I retired to the North West of England. I have vivid memories of the railway, as in those days when `coal was king` all the coal from Treharris Deep Navigation, and Taff Merthyr collieries passed through Nelson. As a child the station and the fields beyond were my playground. I also travelled from there daily when I went to Caerphilly Tech. During my retirement I have recreated this scene as a diorama in `N` scale, including a scale model of the station buildings, footbridge and platforms. The hand ball court, white cottages and Royal Oak Hotel, which formed the Square are also included.

I was not sure what it a “Diorama”was but waiting eagerly to see what Brian would send and was pleasantly surprised by this incredible model he has built at his home in England from his memories of childhood in Nelson, I will let him explain

“It must be recognized that to complete a diorama of even a relatively small area in `N` scale does take up a lot of space.

Therefore; I have concentrated my focus on the station as I saw it from the seat of our outside toilet (I was a little boy at the time) which was below the rear of 95 Shingrig Road. And my memory of the Square with its handball court and the white cottages where my Aunty Mary and Uncle Douglas Beck lived.

Because of these constraints the distance between the rear of the houses on Shingrig Road and the station have been reduced, the back gardens were much longer, and the field at the rear was also deeper to the railway siding perimeter. Also, the number of houses on Shingrig Road has been drastically reduced to fit on the 10 ft x 2ft shelf that it sits on. But I have retained the general geography to include Station Terrace leading from the Square, and Station Road off Shingrig Road. I have also included Donald Street with Allis Inness`s billiard room on the corner with the allotment behind and the Royal Oak as it was. Artistic license has been applied.

Apart from the cottages which are long gone, the Square remains basically the same. But the view that was mine from my toilet seat is totally different. Gone has the station, gone are the goods sidings where Jack Portlock’s lorries used to collect fruit and vegetables, and in its place houses built on what was a bog from which horses had to be rescued at regular intervals.

I last visited Nelson a couple of years ago, it was hard to imagine the station area as it had been. For those older Nelson inhabitants who look at this, take note that I have included the old cycling club hut. Nelson and District Wheelers which I was once a member of.

The last Beck of my family in Nelson died a couple of years ago – Clive Beck- who was brought up in one of the cottages on the Square.”

Click on the images to see them at their best 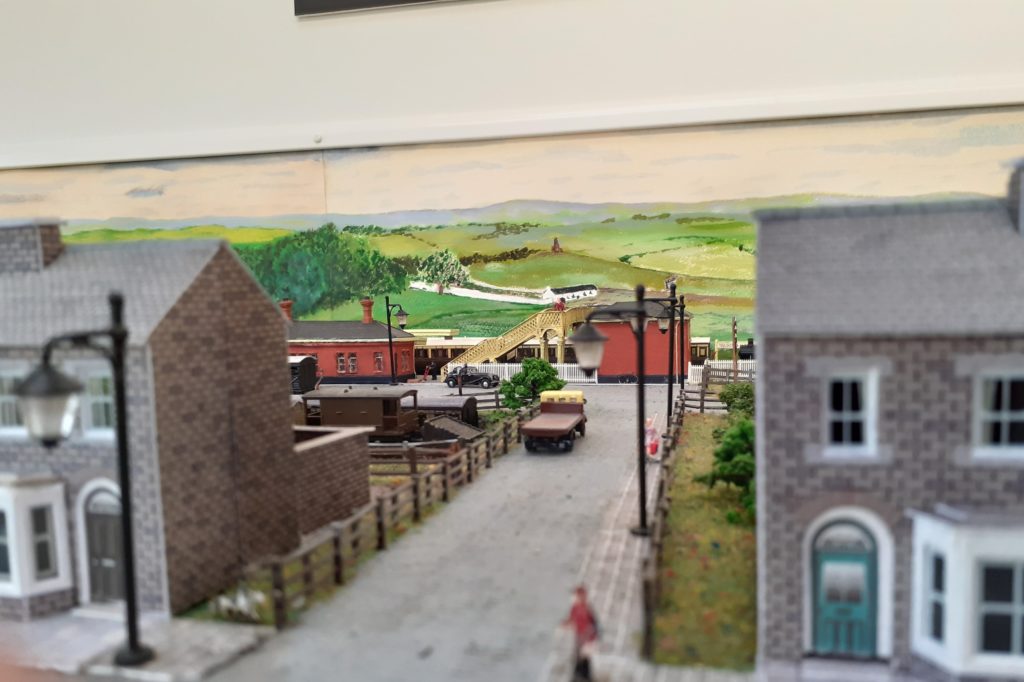 This shows the goods yard, which was quite busy in those days. 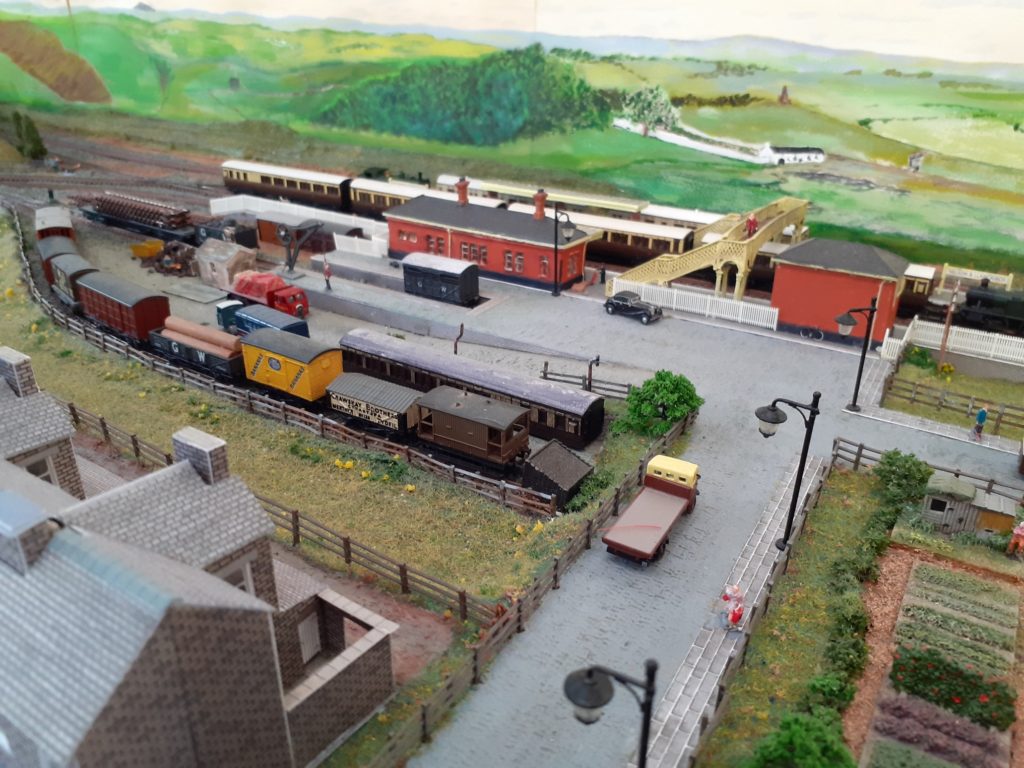 A broader shot showing the allotments as they were 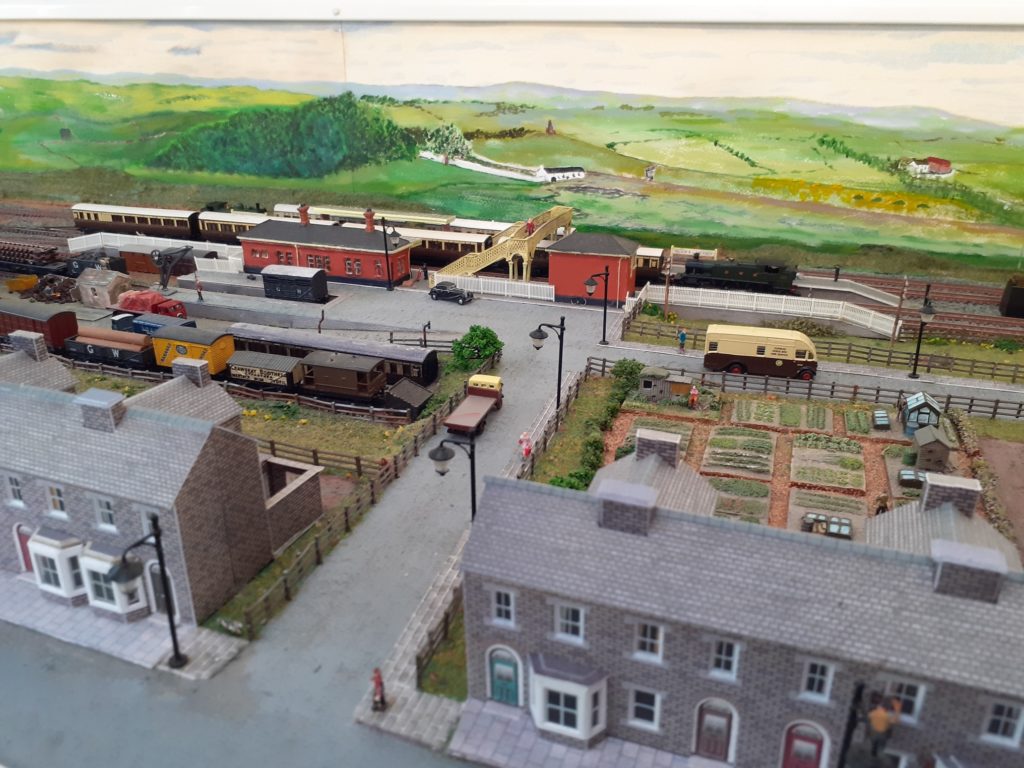 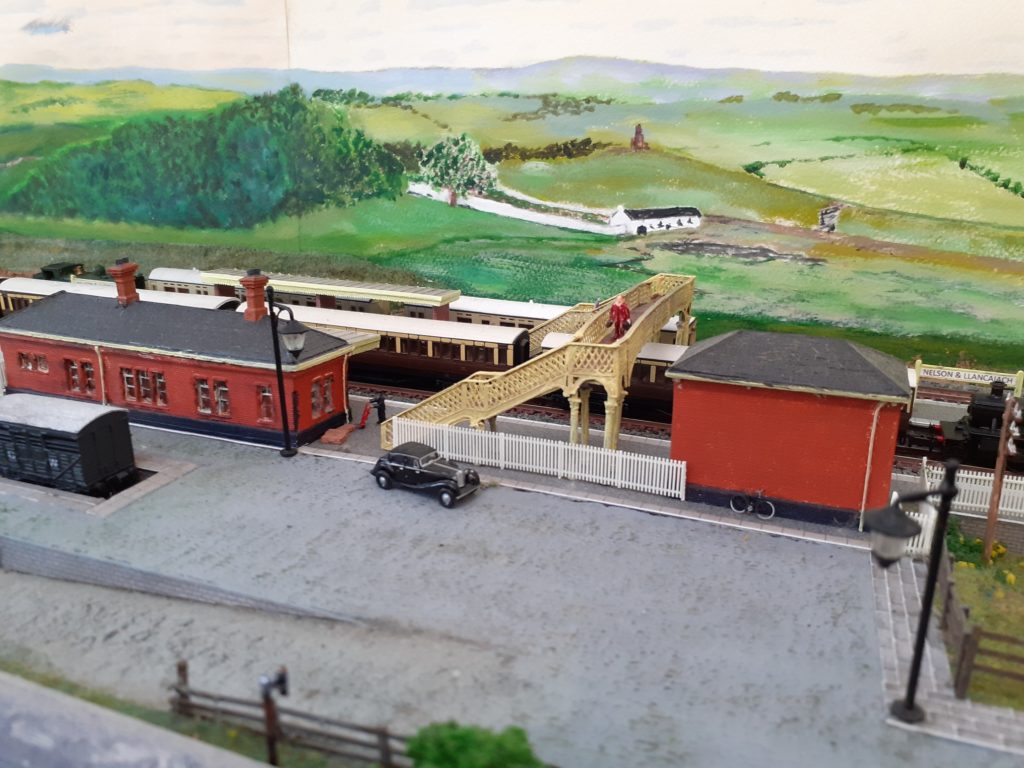 This view is from the Brooklands end of Shingrig Road. Note no East Glam Motors garage or British Legion Club 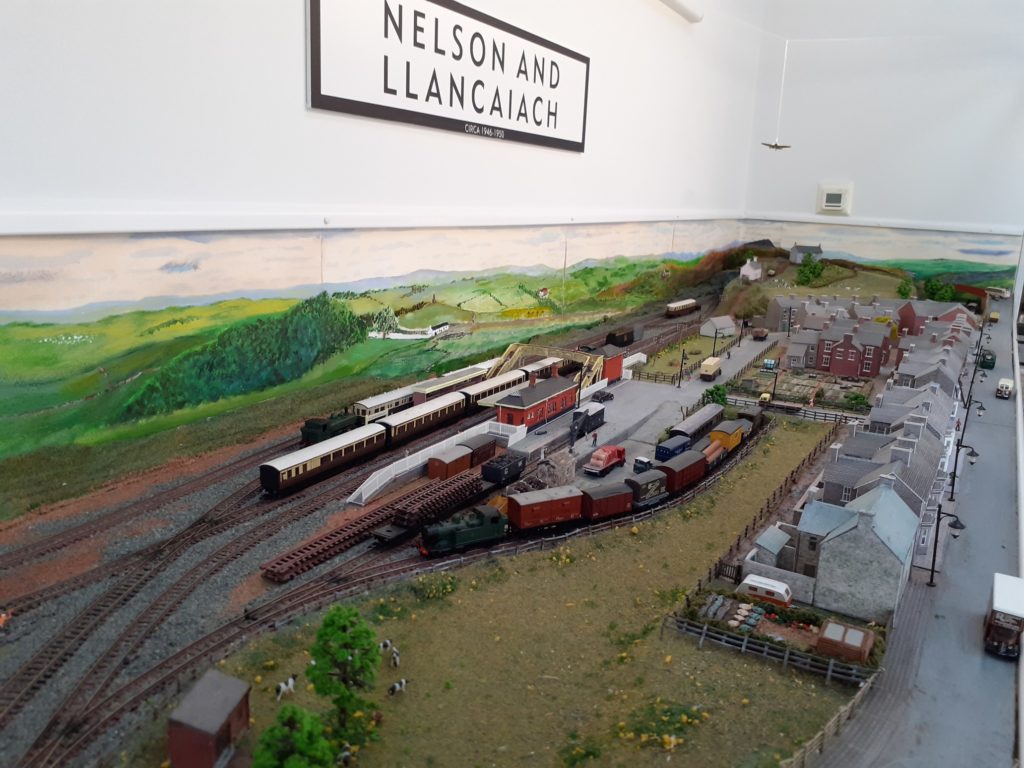 The Square, without the toilet, but with the Police Station and the Caerphilly bus outside. 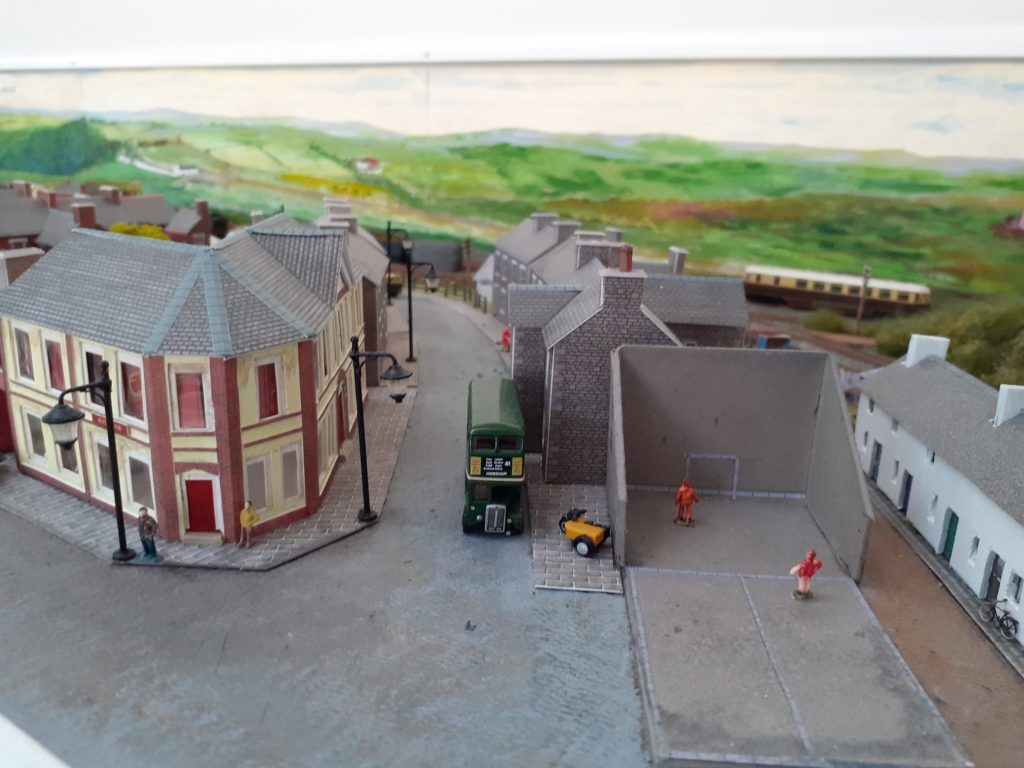 An Aerial view of the model station 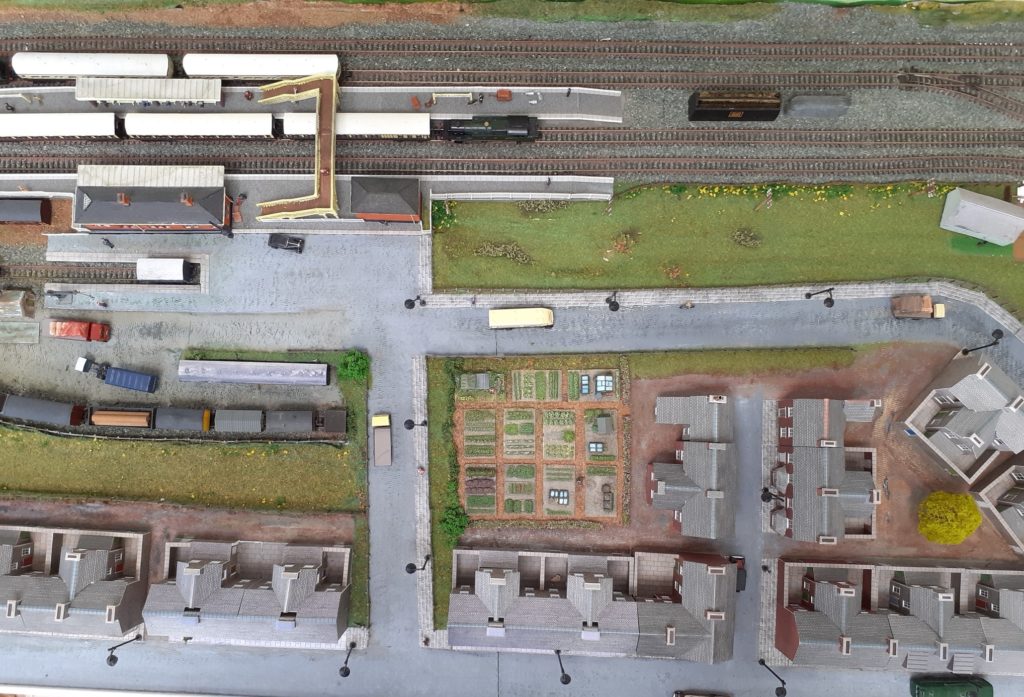 Final shot. Nelson at night. Although I never remember it being this bright. 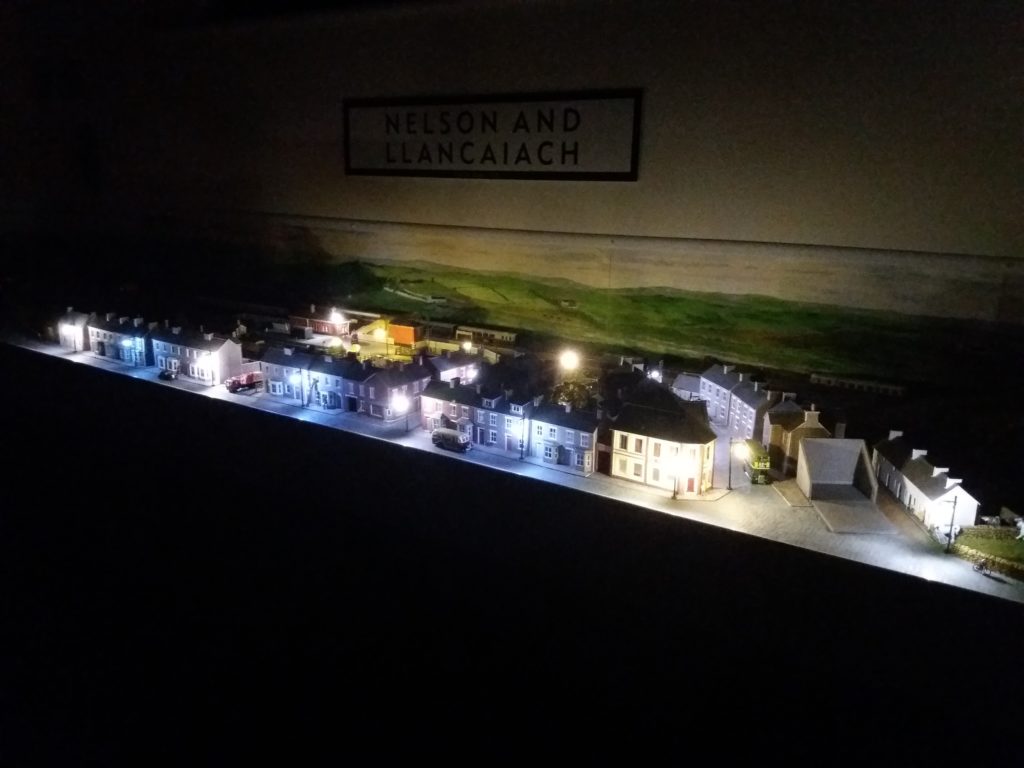 Thanks for sharing Brian